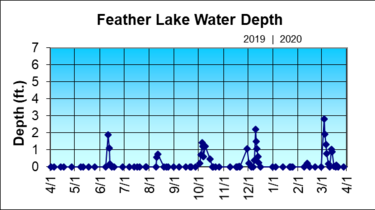 When water is present, Feather Lake is open to the public on weekends, September through May.  Hours are 8 a.m. to noon on Saturdays and 2 p.m. to dusk on Sundays.  Admission is free.

Due to prolonged drought and persistent lack of water, the Sanctuary has been closed for over 7 years now.

Tours for school classes and other groups are available on weekdeays or weekends throughout the year.  For information on scheduling a classroom or group tour, cleck on Schedule a Tour or call (915)747-8663.  For a flyer describing the tours, click here.

Water
When water is present, the levels at Feather Lake fluctuate constantly, and the pattern from year to year is always different. The lake has two sources of water: storm runoff and irrigation flows.  The lake holds water most reliably during the rainy season (July-September).  After heavy storms, the level can rise as much as 4 to 5 feet overnight.  In addition, during the irrigation season (typically mid-February to mid-October), water remaining in local delivery laterals after deliveries have been made is periodically sent to Feather Lake.  Of course, neither of these sources is entirely consistent or predictable.  In wet years, the lake might hold water all year, or for several years.  If no water is available from either source for prolonged periods, often the case in late fall-early winter, the lake can go dry.

Since last June, Feather Lake has experienced brief but substantial flooding approximately every 2 months, with dry conditions quickly returning as the water soaks in.  A storm in early March continued this pattern.  Runoff flooded the basin to a depth of 2.82 feet on March 4, the first time it was fully flooded since October 2018.  It was also the first time since February 2010 that the basin was fully flooded at any time during the first 5 months of the year.  The graph below shows the water depth at Feather Lake from April 1, 2019 to April 1, 2020.

Workdays
The Audubon Society also has regularly scheduled workdays at Feather Lake.  The highly productive natural wetlands and riparian woodlands once found along the Rio Grande in the El Paso area have virtually disappeared.  At Feather Lake workdays, volunteers carry out an ongoing habitat management program that aims to restore examples of these habitats at the sanctuary. The next workday will be Saturday, June 6, 2020, starting at 8 a.m. 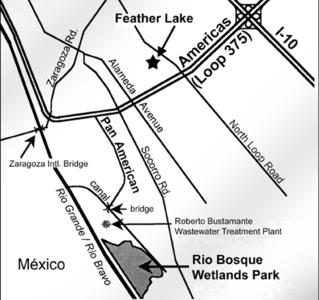 The wetlands, riparian woodlands and desert scrub-grasslands at Feather Lake support a diverse wildlife community.  Walk the 1-mile path around the lake on a spring day, and you might see muskrats motoring across the water surface, spiny softshell turtles and pond sliders basking on clumps of vegetation in the marsh, and little striped whiptail lizards skittering ahead of you on the trail.

But Feather Lake is best known for its birds.  Over the years, 220 different species have been observed at the sanctuary.  Not surprisingly, birds associated with water are especialy well represented.  In some years, there can be hordes of Yellow-headed Blackbirds in early fall, up to 4,000 ducks in mid-winter, and squadrons of White-faced Ibis in spring.

Feather Lake is a wildlife sanctuary El Paso/Trans-Pecos Audubon manages.  It occupies 43.5 acres, including a 40-acre wetland.  The wetland is actually a City of El Paso stormwater detention basin, built in 1969.  Since 1976, Audubon has leased this land from the City and managed it for wildlife and as an environmental education area.  Feather Lake is located at 9500 North Loop Dr. in El Paso's lower valley.  To get there, take I-10 east to Americas Ave., then go right for 1 mile on Americas to North Loop.  Turn right onto North Loop and go 0.4 miles to the stoplight at Bordeaux St.  The Feather Lake entrance is on your left at this intersection. 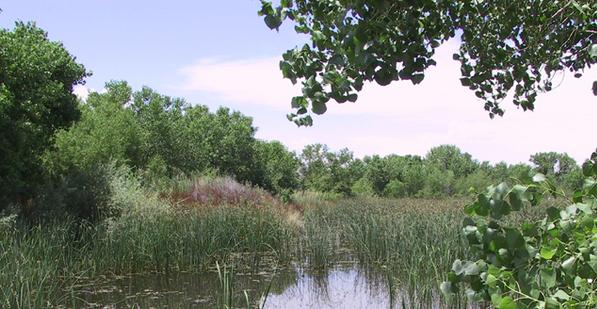